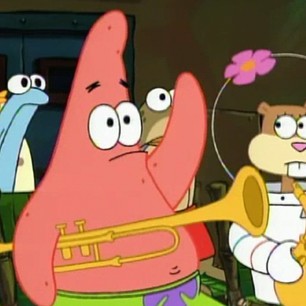 In Season 2 Episode 23 of Spongebob Squarepants, originally aired on November 16th, 2000, the character Patrick mistakenly asserts "No, this is Patrick" when asked "Is this the Krusty Krab?" after being hired at the Krusty Krab restaurant (shown below) No, This is Patrick is a memorable quote by the character Patrick from the animated television series Spongebob Squarepants which is often used in remix videos on YouTube.